Over a period of 6 years beginning in 2011, Jon Crispin photographed over 400 suitcases that were brought to the Willard Psychiatric Center in Willard, NY by patients who were being admitted to the facility.

Many of the owners of the cases lived at Willard most of their adult lives, and are buried in the cemetery across the road from the institution. The collection is housed at The New York State Museum and dates from between 1910 and 1965, is completely unique and is an amazing reflection of the lives of the patients. Jon’s presentation will cover his previous documentation of abandoned 19th Century New York State Asylums as well as his work with the suitcases.

Hosted by the School of Constructed Environments at Parsons School of Design. 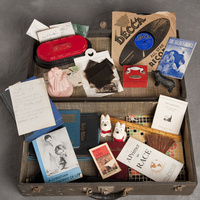