This November, Pictoplasma, the global character design conference from Berlin, returns to New York for its eighth edition—to present the day’s freshest talents and probe the workings of the creative mind on character.

The conference fosters creative exchange and promotes the evolution of style-defining, character vocabulary—from illustration to animation, interactive, game and toy design, to urban and graphic arts. The conference presents artists who excel in their fields and push the boundaries of identity, narrative, medium, representation, and aesthetics.

The event also includes a screening of experimental shorts and music videos a far cry from family entertainment.

Featured speakers include: illustrator Amber Vittoria whose work is a love song to lady lumps in all their bendy, splayed, and hairy glory; Dan Woodger, whose instantly recognizable illustration style and lovable cast of colorful characters ooze retro charm. Represented by Jelly London and New York, he has since expanded into directing and animation. Eric Althin, an emerging toy designer who launched his own brand ‘Sad Salesman’ in 2017 and subsequently won the Designer Toy Award for breakthrough artist of 2018; illustrator and cartoonist Haejin Park who originally hails from South Korea and uses the fluid unpredictability of watercolor to create intuitive childlike work with a psychedelic flair. UntitledArmy, the collective name for the broken pieces of Brazilian artist, Lucas Camargo is based in Brooklyn NY, and can be found haunting coffee shops with his sketchbook, cursed by a compulsive need to capture the stream of life and the contents of his mind; Laura Callaghan, an Irish illustrator living and working in South East London. Her hand painted tableaus in watercolor, Indian ink and isograph pen depict fearless women in maximalist environments generously laced with irony and social critique.

Free registration for The New School students, faculty, and staff.

Registration for the General Public: https://conference.pictoplasma.com/nyc/registration/

Pictoplasma NYC is organized in partnership with The School of Art, Media and Technology and the BFA Illustration Program at Parsons School of Design

Parsons School of Design, School of Art, Media and Technology 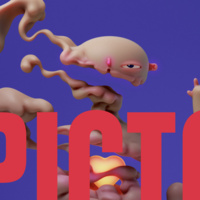