Otherworldly: Performance, Costume and Difference examines the political work at the intersections of costume, fashion and performance produced by three artists: Machine Dazzle, Narcissister and Rammellzee.

These New York-based artists work and have worked at the convergence of disciplines, giving birth to new personas through the act of extreme self-fashioning, masking and renaming themselves. The alternative worlds they have created collapse the division between performance and performativity, art and life, real and make-believe. Their work plays off the notion of the Gesamtkunstwerk (total work of art), in which disciplinary borders between fashion, art, performance, theater, dance and music merge to generate a unitary work. Such collaboration is a visual manifestation of politically- and socially-engaged practice, where difference—whether cultural, racial, gender, sexual or otherwise—is upheld. The artists in this exhibition construct their own worlds whereby they can realize and negotiate non-normative identities and perform Otherness. In this sense, “world-making” is political and presents alternatives and possibilities for new utopias.

Machine Dazzle is an artist known for his creation of elaborate costumes (for genderqueer playwright and performer Taylor Mac, among others). He crosses borders of design, music and performance on and off the stage. His maximalist creations speak to notions of camp and drag queen culture to create, in Hilton Als’s words, “a new kind of surrealism.”

Narcissister is an artist and performer who troubles fixed identities while engaging her culturally and racially hybrid self through the use of masks and elaborate costumes. Using grotesque humor, she challenges racial and gender archetypes and stereotypes in her graphic performances.

Rammellzee was a prominent figure in the New York Street Art scene in the 1980s alongside Basquiat and Keith Haring. The American artist is known for his graffiti and mixed-media sculptures, as well as a pioneer of early Hip Hop, recording Beat Bop with K-Rob in 1983.

Francesca Granata, PhD is Associate Professor in the School of Art and Design History and Theory at Parsons School of Design. She is the author of Experimental Fashion, Performance Art, Carnival and the Grotesque Body and edits the non-profit journal Fashion Projects. She has written for a number of publications, including The Journal of Design History, Fashion Theory and The Atlantic.

Charlene K. Lau, PhD is an Andrew W. Mellon Post-Doctoral Curatorial Fellow at Performa and Visiting Scholar at the Parsons School of Design. Her writing has been published in The Atlantic, The Brooklyn Rail, C Magazine, Canadian Art, Critical Studies in Fashion & Beauty, Fashion Theory and Journal of Curatorial Studies.

Otherworldly: Performance, Costume and Difference is presented the Sheila C. Johnson Design Center at Parsons School of Design as part of the Performa 19 Biennial.

The exhibition was made possible with generous support from the Coby Foundation, the School of Art and Design History and Theory, the MA Fashion Studies and the Sheila C. Johnson Design Center.

All New School buildings will be closed Thursday, Nov 28 - Sunday, Dec 1 for the Thanksgiving Holiday.

Presented by the School of Art and Design History, and Theory at Parsons School of Design 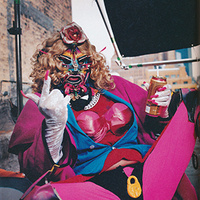