The College of Performing Arts's newest large ensemble, the New School Studio Orchestra is composed of students from the School of Jazz and Contemporary Music and Mannes School of Music, performing music from a wide variety of genres including jazz, soul, pop, and improvised music. This fall the group is led by special guest artist composer/producer Ryan Truesdell. This evening's performance features the music of Gil Evans.

Composer, arranger, and producer Ryan Truesdell was voted “Best New Artist” in the 2012 JazzTimes Critic’s Poll, and is best known for his award-winning Gil Evans Project. In his pursuit to restore and perform Evans’ music directly from his original manuscripts, Truesdell discovered over sixty new, never-before -recorded pieces, 10 of which were released on CENTENNIAL: Newly Discovered Works of Gil Evans, in honor of Evans’ 100th birthday. Unanimously praised by critics, among its many accolades, CENTENNIAL received three nominations and won Evans a posthumous 2013 GRAMMY® Award for “Best Instrumental Arrangement.” Truesdell released the Project’s sophomore album, LINES OF COLOR: Live at Jazz Standard, in 2015. By recovering and performing these lost works, Truesdell has filled in essential missing pieces of Evans’ rich musical narrative, expanding the legacy of one of Jazz history’s most revered composers and arrangers.

A skilled composer and arranger in his own right, Truesdell has been commissioned by trumpeter Ingrid Jensen with the U.S.A.F. Band of the Pacific, pianist Frank Kimbrough with the University of Minnesota’s Jazz Ensemble, and wrote a new piece for Bob Brookmeyer’s 80th birthday concert at the Eastman School of Music. He was also awarded the First Music commission from the New York Youth Symphony’s Jazz Band Classic in 2009.

Presented by The College of Performing Arts.

Free and open to the public, please RSVP via Eventbrite 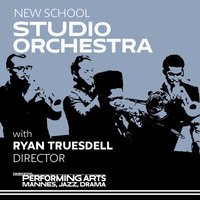