Hoppla, We're Alive! is one of the landmarks of Weimar and early Epic Theater—the opening production of the Piscatorbühne in September of 1927 and a critical success on the scale of Brecht and Weill’s Threepenny Opera. A thrilling indictment of the politico-military-industrial corrupting democracy, Toller’s play remains frighteningly relevant today. Toller’s dissection of political conspiracies, failed revolution, feminist emancipation and class solidarity suggests one answer: it is only in the constant struggle against power that we are alive.

On the occasion of the New School’s Centennial, Eugene Lang College celebrates Erwin Piscator’s Dramatic Workshop and the arrival of epic-documentary theater in America. This adaptation of the Piscator collective’s original production constitutes the work’s US premiere. 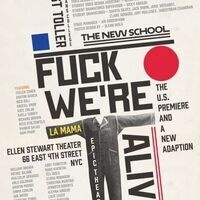